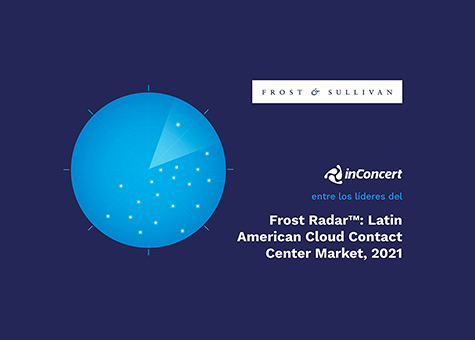 The international consulting firm released its renowned study, which evaluates leading companies in the industry based on two key vectors: innovation and sustained growth. Companies included in the Frost Radar™ are those that "consistently develop new growth strategies based on a visionary understanding of the future and a proven ability to effectively address emerging challenges and opportunities."

inConcert among the best software providers in Latin America

After analyzing several software developers across Latin America, Frost & Sullivan placed inConcert high on the radar. "inConcert has the best regional performance in Frost Radar™, and its placement among the top vendors is noteworthy," says Juan Manuel Gonzalez, Research Director at Frost & Sullivan. Among inConcert's success factors in the region, analysts noted "its comprehensive technology portfolio, deep verticalization, and the ability to offer complementary on-premise and cloud-based solutions (both using the same code base)."

The consultancy also highlights inConcert's team of business analysts and specialized engineers, who are able to identify the needs and preferences of customers and their competitive ecosystem. "inConcert's software portfolio seamlessly integrates omnichannel interaction management with business applications, enabling the company to add value at all stages of the customer lifecycle and peripheral applications," the analyst details.

This recognition in the Latin American market adds to inConcert's recent distinctions in Europe. In 2020, inConcert had been included in the Frost Radar of "Contact Center as a Service" in Europe and was awarded the Enabling Technology Leadership Award (as in 2016 and 2017). In this way, inConcert reaffirms its position as a global benchmark in the industry.

Convertia is proud to count on a leading technology such as inConcert to support companies on their way to Digital Transformation.

Do you have any questions?

Coordinate a consultation session with an expert.

Want to see Convertia into action?

Request an online demonstration personalized of our technology.

The 13 factors that threaten your ROI and how to optimize them with technology.